“A Banquet of Consequences” is the 19th book in Elizabeth George’s Inspector Lynley series. It’s a good, traditional English murder mystery with a very strong focus on character development.

The plot revolves around the poisoning of a feminist author and her editor. But the storyline really begins three years earlier when the son of the author’s assistant commits suicide. Three years later, the mom is still a mess about her son’s death and as the story progresses we find out she’s just a mess, in general. As her true nature is 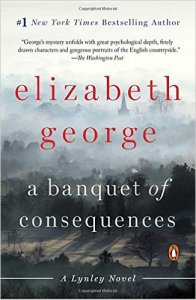 revealed, and as we learn more about her seriously screwed up family, it opens up several possibilities about the identity of the murderer, the possible motive and even the intended victim.

Working the case are two detectives from Scotland Yard, Thomas Lynley and Barbara Havers. They are the two main characters in this series, but in “A Banquet of Consequences”, Havers is the star of the show. She’s always been something of a misfit. She’s rough around the edges, socially awkward and impetuous at work, often skirting the edges of insubordination. In this book, she’s in hot water with the boss. She needs to solve this case, and do it by the book, in order to start redeeming her reputation. She and another detective plant themselves in the dead author’s house and start unraveling the mystery, uncovering some sordid details about some of the characters’ lives as they do so.

Elizabeth George is an extremely gifted storyteller. She is especially talented at creating characters with psychological depth. She uses dialogue really well as a tool to enhance that depth. The words coming out of Caroline’s (the author’s assistant’s) mouth were so despicable that I was cheering for her to be the next victim. Ms. George is also very skilled at developing several separate story lines and then weaving them into one comprehensive tale.

On the negative side, the book was really long. At first, it was a page turner for me, but towards the end I found myself counting the pages until it was over. It probably could have benefited from more editing. It also painted a dismal portrait of romantic relationships. Many of these characters had some serious flaws that caused them to either ruin or severely overly complicate their relationships. I just found this a little bleak.

Overall, I give “A Banquet of Consequences” a thumbs up, but with a caution about the length. I should also note that you probably don’t need to have read the preceding books in this series in order to understand and enjoy this one.

Do you have any favorite murder mystery series? Tell us about them. Don’t be shy!

2 thoughts on ““A Banquet of Consequences”, by Elizabeth George”