“News of the World” is June’s Kind of Like a Book Club book. I’m very interested in hearing everyone’s opinions so hopefully we can get some good discussion going in the comments section below.

“News of the World” is a well spun tale that takes place in Texas in the 1870s. It’s the story of Captain Jefferson Kidd, who is hired to return 10-year-old Johanna to her relatives upon her liberation from the Kiowa. Johanna has lived with the Kiowa people for four years and has completely adopted their ways and their language, creating several challenges for CPT Kidd as he tries to safely escort her several hundred miles across the still very wild Texas countryside.

CPT Kidd is a distinguished, old widower who makes a living traveling to smaller towns and doing public readings from 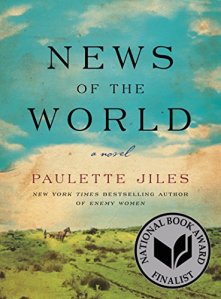 newspapers about world events. It’s a job that seemed to satisfy the wanderlust he felt upon the death of his wife. But his life is lacking some purpose until he is hired to take Johanna back to her aunt and uncle. Although he is originally wary of the feral girl, the two begin to form a bond despite lacking a common language or culture. This bond is made possible by the basic human decency both characters have.

Adversity also helps build the bond between Johanna and CPT Kidd. Texas was wild and sometimes lawless in the 1870s. Traveling on a horse drawn wagon through unsettled countryside was physically challenging and made even worse by the raiding parties that would frequently attack travelers. Johanna and CPT Kidd faced and fought their share of bad guys and it brought them closer together.

Thankfully, they also met some good people during their journey. And that’s why I really liked this book. To me, it was a story about human goodness. It was an example of how two strangers, far apart in age and not even speaking a common language, can be decent and caring to each other. It’s a great message!

Okay, now I’d like to hear your opinions. If you’re having a hard getting started, try answering these questions (my responses are in parentheses):

1. What connects Kidd to Johanna? Why does she seem to trust him so easily? (Children are often good judges of character. CPT Kidd had age and personal dignity on his side. I think both helped him come across as trustworthy. )

2. Ten-year-old Johanna made buckshot out of dimes and slaughtered a couple of chickens so they could be eaten. What useful skills did you have when you were ten? (I could wiggle my ears and I played a fierce game of Red Rover. )

3. If you were transported back to 1870s Texas, what modern amenity would you miss the most? (Hot showers. And air conditioning. And text messaging. Wait, I can only pick one?)

Actually, it would be fun if everyone answered those questions. What do you think?

17 thoughts on ““News of the World”, by Paulette Giles”

This blog is what happens when a woman who is productive by nature gets confined to a hospital bed. I want to provide readers with some book recommendations and I hope they do the same for me!
Join 419 other followers