The Guest List is a highly satisfying suspense novel that takes place during the wedding from hell on a completely inhospitable island off the Irish coast. A cautionary tale about destination weddings? Perhaps!

Some compare The Guest List to the works of Agatha Christie. While I might not go that far, it was packed with atmosphere, lots of shady suspects, and has a skillfully developed and mysterious murder.

Jules and Will are getting married. They’re an up-and-coming power couple – handsome Will has his own TV show and beautiful Jules started and runs a very successful online women’s magazine. They haven’t been together long and it’s slowly revealed that they really don’t know each other very well.

The island is a really inappropriate place for a wedding. It has a dangerous bog, treacherous cliffs, horrible weather, a tragic past, 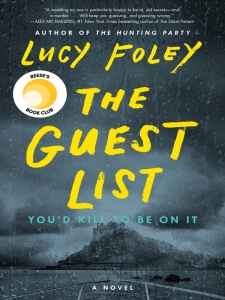 and the guests have to take a terrifying boat ride to get there. But bridezilla Jules thinks it’s perfect – so out of the ordinary that it will make the wedding a sensational “thing.” She had additional motive, which is revealed later in the book.

The wedding party and guests are an interesting mix and include Jules’ secretive half sister and her male best friend, Charlie, and his wife, Hannah. Will’s part of the guest list includes lots of guys from his posh boarding school who frantically try to relieve their glory days. Lots of liquor and drugs are consumed. These people behave like savages.

At the beginning of the novel, you know something bad happens during the nighttime wedding reception, probably a murder. But you don’t know who or even if anyone gets murdered until the very end. Leading up to the reveal are scenes from the previous day and the morning and afternoon of the wedding, as told by Jules, her half sister, Hannah, the best man, and the wedding planner who also owns the wedding venue.

I really liked the structure of the story and admire the skill it took to pull this off. Not revealing the murder victim until the end was brilliant (but not so hard to figure out) and it took real craftsmanship to gradually reveal secrets and develop motives during the preceding scenes. This particular format makes the reader try to figure out both the victim and the murderer. Delightful! I found myself surprised several times and didn’t guess the identity of the killer. Either I’m way off my sleuthing game or the writing was very clever – probably a combination of both.

Thumbs up from me. I recommend The Guest List to people that enjoy good suspense novels.

Have you read any good suspense novels recently? I’m looking for recommendations!

4 thoughts on “Book Review: The Guest List by Lucy Foley”