World War II Italy is the setting for “Beneath a Scarlet Sky,” an engrossing novel based on the wartime experiences of teenager Pino Lella. Although it’s based on actual events, it reads like a thriller that has a lot of suspense and a lot of heart.

Seventeen-year-old Pino lived in Milan. He was a typical teenage boy, running around with his friends and hoping to land a girlfriend. For the first few years of the war, he was pretty insulated from its more devastating effects, but that all changed in the summer of 1943, when Allied forces began bombing Milan. When the bombing persisted and hit too close to home, Pino’s parents sent him to a boys’ camp high in the Alps that was run by a Catholic priest named Father Re. They thought he would be out of harm’s way there.

It turned out that camp in the Alps was part of the Catholic Underground, which helped Jews escape across the Alps into neutral Switzerland. Father Re immediately recruited Pino to act as a guide to lead groups of Jews to safety. Pino turns out to be extremely resourceful and capable as he leads ordinary people (ie, not mountain climbers) across rugged terrain in sometimes terrible weather conditions.

Father Re and his group risked imprisonment or execution for helping Jews escape the Nazis. They’re an example of people who 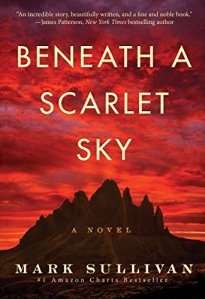 act heroically and with compassion when faced with an adverse situation. While in the Alps, Pino also encountered the exact opposite in the form of a band of men who masqueraded as resistance fighters but were really just lawless, violent thugs. In the chaos of war, when the normal enforcement of laws is disrupted, the baser, uncivilized nature of some people is unleashed. It’s a grim reminder of why we need laws and law enforcement. This theme of good versus bad human nature and behavior is a theme throughout the rest of the book.

By a twist of fate, he is chosen to be the driver of the Nazi general who is in charge of construction and engineering in Italy. It makes Pino privvy to a lot of sensitive German intelligence, which he passes along to the Italian resistance. Pino is exposed to things that are remarkable, devastating and haunting. He meets Mussolini. He witnesses the inhumanity of forced labor crews (slaves). And he sees cruel, shocking violence.

Pino’s personal life is greatly affected by the war. He hates working for the Nazis and some of his friends and family hate him for it, too. He longs to tell them he’s a spy but instead he has to endure their loathing. In addition, several people in his life are killed, typically in brutal and senseless acts. He does find love and that’s one of the few bright things in his war experience.

Pino’s adventures in the Alps and as a driver for the general are entertaining, hair-raising and sometimes bleak and bluntly violent. Pino himself is impressive and resourceful and has a lot of heart. The author covers a great breadth of important topics about the war – the despicable behavior of Nazis and fascists, the persecution of Jews and political dissenters, the helpless suffering of civilians, the heroism of otherwise ordinary people, the frightening brutality of angry mobs. History is important to know and with “Beneath a Scarlet Sky”, Mark Sullivan has created a work that is both entertaining and educational and should appeal to teenagers and adults. I’m definitely going to encourage my high schoolers to read it (or at least see the movie – release date tbd).

Overall, an excellent book! I highly recommend it.

“Beneath a Scarlet Sky” is March’s discussion book. Don’t be shy! Share your opinion below in the comments section.

5 thoughts on ““Beneath a Scarlet Sky”, by Mark Sullivan”

This blog is what happens when a woman who is productive by nature gets confined to a hospital bed. I want to provide readers with some book recommendations and I hope they do the same for me!
Join 417 other followers