All the Light We Cannot See is a beautifully written, poignant story set in Europe during World War II. It tells the story of how a blind, French girl and an orphaned German boy experience the war.

There is something about World War II that really fascinates and draws me. I think it’s the whole good nobly prevailing over evil thing. But when I read a book like this, which depicts the horrors of war as experienced on a very individual level, it’s clear that there are more losers than winners in wartime.

A main theme of All the Light We Cannot See is the impact war has on the especially vulnerable – children. In that respect, it reminded me a lot of The Book Thief.  The children in both books lose so much – family, friends, innocence, hope, their lives. Sometimes they have adults in their lives who are good people who try to protect them (the relationship between the blind girl, Marie-Laure, and her father is particularly touching ), but ultimately those adults get swept up in events they can’t control and become nearly as powerless as the children. 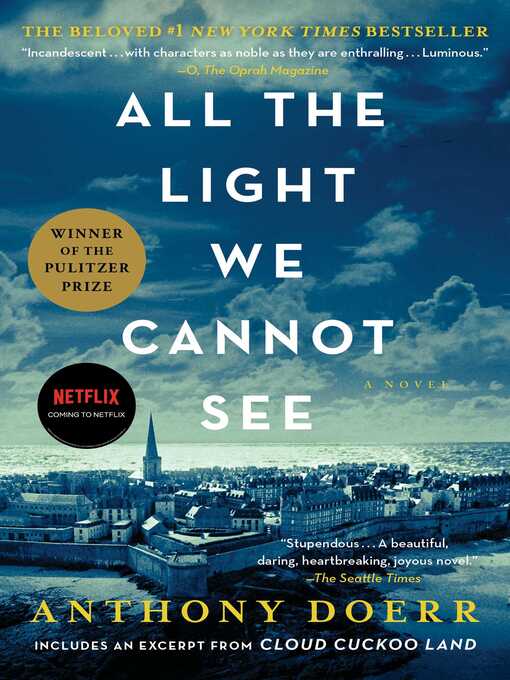 I actually purchased All the Light We Cannot See about six months ago when it caught my eye on Amazon. It was getting terrific reviews and the book summary sounded interesting. But I strongly suspected it would violate my “I don’t read books that make me cry” rule, so I didn’t read it right away. However, my hand was gently forced when my husband’s book club chose this as their book to read this month and he suggested I read it, too. (If you’re curious what a men’s book club reads, as a generalization I’d say they read more nonfiction than the average women’s book club. I may need to blog about their reading list because it contains some good stuff. )

Anyway, the book did make me cry. Twice. The first time wasn’t even triggered by a specific event in the book. Rather, it was a result of reading it all day and being pulled into this steady march towards an ending that could only be heartbreaking. Anthony Doerr’s writing style is beautiful and very effective at creating atmosphere and emotion. And he doesn’t do that by using flowery adjectives or complicated metaphors or esoteric symbolism. In fact, the language he uses is fairly simple and very accessible. It’s the way he knits the language together that is masterful and the reason he won a Pulitzer for this book.

So, I definitely recommend All the Light We Cannot See, but it isn’t light, poolside reading. You need to be in the right frame of mind for it.

19 thoughts on “Book Review: All the Light We Cannot See by Anthony Doerr”