A Man Called Ove is a story that reminds us that everyone has a personal history that has shaped them, most everyone has redeeming qualities that you can uncover if you try hard enough, and life isn’t so bad if you let other people in.

Ove is the quintessential curmudgeon next door. He “inspects” the neighborhood daily, rails against rule violators and holds strong, inflexible opinions about everything. At the beginning of the book, Ove is very unlikable. But he becomes a more sympathetic character as the book progresses and we learn more about him. For example, we learn that his wife of 40 years died just six months ago. She was his 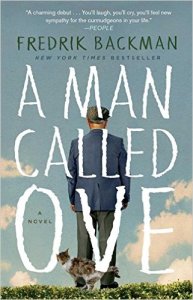 anchor and their’s is a sweet love story. And Ove was just laid off from his job. So this man who takes pride in his work ethic now feels obsolete in a society he no longer understands. Everybody has a history that makes them who they are.

Also really important to this story are the people who embrace Ove despite his prickly ways. This includes a pregnant, Iranian neighbor who figuratively pulls Ove kicking and screaming out of his self-imposed isolation and back into a supportive community. This community sees something of value in Ove and, consequently, Ove begins to feel valued again. Although he would never admit it because he is still, at heart, a curmudgeon.

I liked A Man Called Ove. It was a good reminder about human dignity and the power of love and acceptance. It had me wondering how I would react to the grumpy man next door. Unfortunately, I’d probably be more inclined to give him a wide berth rather than giving him a chance. That probably means I’M the neighborhood curmudgeon!

Thanks, Virginia, for the book recommendation!