“The Scorpio Races” is a beautifully written, young adult fantasy novel that explores love, courage and loyalty against the backdrop of an island culture that largely revolves around the carnivorous water horses that emerge on its beaches every autumn. It’s an excellent read and, happily, not just for young adults.

The book gets its name from a race that’s held on the island every November. As the dangerous water horses emerge from the sea, the men of the island capture them and try to control them long enough to win the race. Puck, the heroine, decides to become the first female to enter the race, hoping to win it so that her family can keep their 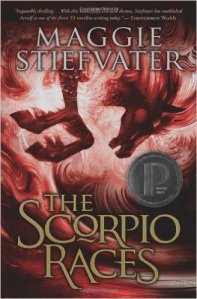 home. While preparing for the race, she encounters Sean, the hero, who has his own reasons for wanting to win. In addition to a love story, the book also provides lessons about overcoming adversity, making hard choices and figuring out where you truly belong.

Ms. Stiefvater’s writing style is beautiful and often poetic. She creates an atmosphere that is both grim and compelling. Her characters are well developed and she puts them in situations that define for the reader who they are and what they believe in. She puts just enough myth and magic in the book to make it interesting, but not so much that it’s distracting. In short, it’s an excellent book that should appeal to a wide audience.

This book came highly recommended by my high school English teacher, Bob Sailler. I will admit that I didn’t jump on it right away because of its “young adult” categorization. I don’t read young adult. No “Hunger Games”, no “Twilight”, not even “Harry Potter”. But it’s not because I’ve had a bad experience with any of these books. Rather, it’s because I’ve been a stodgy, middle-aged woman since I was about twenty and I just assumed that I would have a hard time relating to the characters and the plot. I now stand corrected! Thanks for the recommendation, Bob!

What young adult fiction have YOU enjoyed reading?

6 thoughts on ““The Scorpio Races”, by Maggie Stiefvater”