Author Dominic Smith delivers beautiful prose and a melancholy mood in “The Last Painting of Sara de Vos”. Spanning three different time periods, the book tells the tale of a 17th century artist and the 20th century forger who copies one of her paintings.

Sara de Vos is a (fictional) Dutch artist who, it was thought, produced only one surviving piece, a sad but compelling painting that had been part of Marty de Groot’s family’s collection for centuries. In the late 1950’s, the original is replaced with a well- 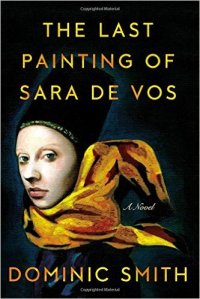 executed forgery and Marty sets out to identify the forger, Ellie Shipley, and exact his revenge, an effort that takes an unexpected turn.

Mr. Smith explores life in 17th century Holland by giving readers a glimpse of gender norms, the stifling power of guilds, the folly of speculating in tulip bulbs and the devastating effects of the plague. It’s a pretty grim time and place and Sara does not escape unscathed. I’ll just leave it at that.

Fast forward to the 20th century and the author gets a little more personal with the characters, delving into unhappy childhoods, an indifferent marriage, frustrated career aspirations and decades of carrying guilt.

This is no ordinary work of fiction for a couple of reasons. First, the language the author uses really is quite exceptional and he uses it well to create atmosphere, develop characters and build mild suspense. The second reason has to do with creativity. This is one of those books where I found myself asking “how did he come up with that idea” several times. And it wasn’t about the plot (although it’s good). It was more about some of the situations the characters found themselves in as well as some of the details of their lives.

The only downside to this book is that it’s as gloomy as an overcast winter day. But good literature often is a little heavy, right?

Have you read “The Last Painting of Sara de Vos”? Share your opinion.

3 thoughts on ““The Last Painting of Sara de Vos”, by Dominic Smith”