“Where’d You Go, Bernadette” tells the story of a family that’s in trouble mainly because the “grown ups” have lost their way. It’s an often hilarious and sometimes mildly appalling parody of life in these days of helicopter parenting, perceived victimhood and impersonal electronic communication.

Bernadette is the mother in this family. She was once a very promising architect but has been in a twenty year funk that has made her antisocial and bitingly (and hilariously) snarky. Her husband, Elgin, is a workaholic tech genius who really should have dragged Bernadette out of her self-indulgent funk years ago. Instead, he now plots an extreme intervention that’s doomed to fail. Bee is their teenage daughter who is extremely precocious and a little over indulged (there’s that word again) by Beatrice and Elgin. For example, her parents give her a family cruise to Antarctica for a 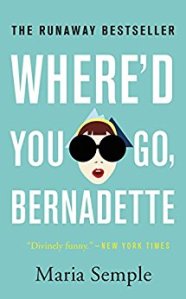 middle school graduation present. Fortunately, Bernadette and Elgin seem to genuinely love Bee and haven’t messed her up too badly.

As the time to depart for the trip draws nearer, Beatrice begins to fret about seasickness, being forced to socialize with other passengers and a number of other related issues. Eventually, she just disappears without a trace. Bee tries to figure out what happened to her by pouring through emails sent by her parents, a crazy neighbor, Elgin’s assistant, a psychiatrist and a personal assistant in India. In fact, about 2/3 of the book is composed of the text from these emails and most of them are hysterically funny.

Ms. Semple uses this epistolary technique extremely well. It lets us see inside characters’ heads because they tell part of the story in their own words. And because people often say things in emails that they would never dream of saying face-to-face, the result, in this case, is over-the-top funny. For some reason, I like this technique. It was also used very effectively in “The Guernsey Literary and Potato Peel Society.” Maybe the snoop in me just likes reading other people’s mail.

I suppose on the negative side, Bernadette never won me over. She was self-absorbed until the very end. While this made for some highly entertaining email correspondence and resulted in some comedic behavior, she wasn’t someone I’d want in my own life. But that’s okay because I wasn’t looking for a best friend when I selected this book. I was looking for a good laugh and I got it.

Thanks for the recommendation, Jeanne!

11 thoughts on ““Where’d You Go, Bernadette”, by Maria Semple”