From the author of the Twilight series comes a highly entertaining thriller. But don’t worry – there’s not a single teenage vampire in sight.

Actually, I’m not sure if “The Chemist” fits better into the category of ‘thriller’ or ‘romantic suspense’. It’s really both.

Juliana is a former interrogator for a shadowy US government agency known vaguely as ‘the department’. She’s a brilliant scientist whose specialty is developing and administering chemical compounds that are so painful that people typically give up their secrets. Despite her professional competence, the department turned against Juliana and she has spent the last three years on the run.

Now her former agency offers her a deal – help them stop a biological attack and they will call off the assassins. Juliana takes 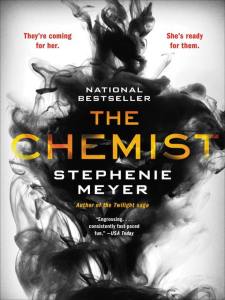 the deal and embarks on quite an adventure, most of which I can’t share because I don’t want to spoil it for anyone.

Instead of sharing the plot, I’ll talk about strengths and weaknesses. I really liked the characters in this book, especially a pair of adult brothers, one of whom is a hilarious parody of the alpha males that typically rule spy thrillers and the other a sweet beta male who falls in love with Juliana despite having the worst first date ever. The dialogue among the characters, especially the brothers, is often unexpectedly funny.

The way Juliana protected her safe houses was also very cleverly developed. She’s a small woman who has to rely on her brain for survival, since she doesn’t have the brawn. So she put her chemistry skills to very creative use to protect her houses and disable her attackers. She also picked up some clever tricks from the spy thrillers she read so voraciously.

Drawbacks: torture scenes. Torture really bothers me. I also didn’t buy the insta-love that happens between Juliana and the male hero. It was sweet and fun to read about, but when people declare their love for each other only days after meeting each other, it just feels like a forced story line. (How’s that for love-at-first-sight skepticism on Valentine’s Day?) The last thing that didn’t sit well with me was casting the US government as omnipotent villains. The more I learn about our government, the more I question their competence at actually being an effective villain. Plus this scenario means US soldiers get killed by the protagonists and that’s never good, right?

Despite these few drawbacks, I really enjoyed “The Chemist.” It has a decent plot, a lot of action and strong characters who often interact in very entertaining ways. And if that isn’t enough for you it has dogs – several highly trained and fiercely loyal dogs.y

Thanks for the recommendation, Jenifer!

Have you read any good thrillers or tales of romantic suspense recently? I’d love some recommendations!

2 thoughts on ““The Chemist”, by Stephenie Meyer”