This post may contain Amazon Affiliate links. As an Amazon Associate I earn a small commission from qualifying purchases. (This in no way affects the honesty of my reviews!) All commissions will be donated to the ALS Association.

Sometimes books stay with you long after you finish them. Where the Crawdads Sing is that kind of book. Part coming of age story, part romance, part murder mystery, part court room drama, this beautifully written novel will squeeze a lot of different emotions out of you.

Where the Crawdads Sing begins in 1969 with a dead body. Chase, the town’s handsome former high school football hero, has died under suspicious circumstances. But was it murder? The details unfold in between flashbacks that provide the background of the crime.

And those flashbacks mostly tell the haunting story of Kya, who lives in the marshes of North Carolina. In the early 1950s, Kya is a 7-year-girl living in a primitive shack with her parents and four siblings. Her father is an abusive alcoholic but her mother tries to give the kids a decent childhood, until she just can’t do it anymore. She packs her suitcase and abandons the family, leaving her five kids with their no good dad. This kicks off a long, sad theme of Kya being abandoned by the people in her life. Three older siblings soon follow suit. The last remaining brother eventually leaves following a confrontation with their father, leaving Kya alone with the lout. 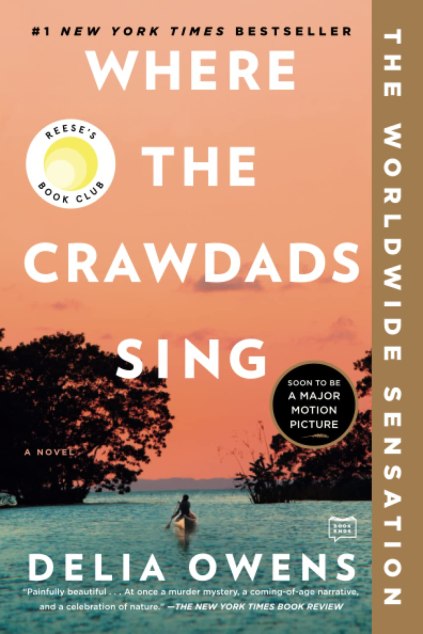 What follows is a testimony to Kya’s resilience and ingenuity. Kya has to figure out how to cook, clean and dodge truant officers (her one day school experience traumatizes her, so she never goes back). She and her dad even manage to coexist for awhile, until he disappears, too, when Kya is around nine. At the risk of sounding corny, she becomes a true child of the marsh, embracing its beauty and wildness and even eking out grocery money by selling some of its resources (mussels). She is befriended by the black owner of a nearby bait and tackle shop who, along with his wife, keeps her supplied with some of the bare necessities. Other than that, Kya has little contact with people and becomes skittish, awkward and the subject of local rumors. She is the Marsh Girl.

When she is about fourteen, Kya is befriended by Tate, one of her brothers old friends. Tate teaches her to read and then feeds her voracious appetite for learning by supplying her with lots of books. Tate shares her love of the marsh and the two spend a glorious year exploring the marsh and falling in love. But then he leaves for college and she’s alone again.

Several years pass and Kya is tired of being alone. Beautiful now and wild, she catches the eye of Chase, the former football hero. Let’s just say he does her wrong and then a few years later he does her wrong again. Then Chase turns up dead and Kya finds herself on trial for murder. We don’t find out until the very end what really happened.

There is a lot to like about Where the Crawdads Sing. The prose is quite lovely and sometimes feels like a love letter to the North Carolina low country. The language choices also help the author effectively develop the characters and set a very distinctive tone. You will be craving chicken fried steak when you finish this book. I also thought the plot was well done. It definitely kept my interest.

The novel tackles some tough subjects – segregation, domestic abuse, child abandonment, self determination, sexual assault and vigilante justice, to name several. I didn’t always agree with the outcome in the book, but I certainly appreciated seeing a different point of view.

Another small criticism – I think the author tried to wrap up too many things in the final chapter of the book, fast forwarding from 1970 to 2009. Some things can be left to the reader’s imagination. All I needed to know is who killed Chase.

Overall, an excellent book that I wholeheartedly recommend. Thanks for the recommendation, Megan. I was in a bit of a reading slump and this helped pull me out.

Have you read Where the Crawdads Sing?  What did you think? Or, an alternative question – how do you get yourself out of a reading slump?

8 thoughts on “Book Review: Where the Crawdads Sing, by Delia Owens”