The Silent Patient, currently flying high on the bestseller lists, is a psychological thriller that lives up to its hype. A clever, twisty plot and creepy psych ward atmosphere will certainly appeal to fans of this genre.

Six years ago, Alicia and Gabriel Berenson were a seemingly happy couple who were deeply in love. She was a successful painter and he was a respected fashion photographer. They seemed to have it all, until the night she put five bullets in his head. She hasn’t spoken a word since. Her only communication was a mysterious self-portrait right after the murder. Since then, she’s been confined to a psychiatric hospital, heavily drugged and noncommunicative. 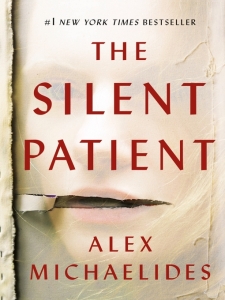 Enter Theo Faber. Theo is a therapist who has been fascinated by the notorious murderess since the moment the crime happened. When a position opens at the creepy hospital, he jumps at the chance, even though it was considered a step down on his career track. He believes he can reach Alicia even though so many others have failed. He begins to work with Alicia. When he can’t get through initially, he seeks out important people from her past in an effort to understand what makes her tick. Let’s just say things get interesting.

The author does a decent job with character development and creating atmosphere. The story was mostly told from Theo’s point of view and he was a sufficiently complex, damaged man with his own psychological problems. Additionally, the setting of a decrepit old psych hospital was a good choice. That allowed the author to populate Alicia’s world with problematic patients and psychiatrists. But the real star of the show was the plot, and I can’t say much about it without giving it away. I will just say it was well paced and had a really good twist.

But it wasn’t all perfect. Theo waltzed right in and took over a patient that already had a care team. Would that really happen? And he was left alone with her several times in a closed room. And he gave a woman with a history of of violence some pointy-handled paint brushes. Even I knew that would end badly. So some the psych hospital procedures didn’t ring true to me, but then my knowledge of the subject is pretty much nonexistent. So it didn’t damage my opinion much. It was just something that made me pause and be a little skeptical.

Overall, I give The Silent Patient a strong recommendation. It was a step up from some of the psychological thrillers I’ve read recently (I’m looking at you, Bring Me Back!) Bonus: it’s a very quick read.

This post may contain Amazon Affiliate links. As an Amazon Associate I earn a small commission from qualifying purchases. (This in no way affects the honesty of my reviews!)

8 thoughts on “Book Review: The Silent Patient by Alex Michaelides”