Mary Beth Keane’s debut novel, Ask Again, Yes, explores the effects that a violent incident has on two neighboring families, as well as the toll mental illness takes on spouses, children and the patient. The novel was okay but it was missing an engaging story line past the first 1/3 of the book.

I had mixed emotions about this book.

The first third was good. It tells the story of two young NYPD police officers who find wives, move next door to each other in the suburbs and have kids. But that’s where the similarity between the two men stops, because one of the men’s wives is mentally unstable and her husband avoids it rather than dealing with it. Their son, Peter, suffers the fate of a child who has to tiptoe through life, afraid of setting his mom off. Luckily, his best friend, Kate, lives next door and makes his life better.

Peter and Kate have been best friends since they were little kids. But as they grow older, their friendship begins to morph into romance. When 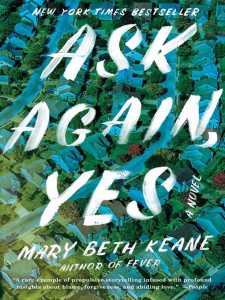 they are fourteen, they are involved in an incident that triggers Peter’s mom, who has been slowly unraveling, to commit a violent act. Peter moves away, breaking ties with Kate.

And this is where the novel became mostly uninteresting to me.

The rest of the novel covers the next 26 years of the characters’ lives. Some eventful things happen – one of the characters gets cancer, another goes to rehab, Peter’s father abandons him – but it’s told in bland detail. There are some heart tugging moments, especially with Peter who was a well developed and sympathetic character. But mostly I felt like I was listening to that chatty friend that all of us have – the one that is unusually skilled at sharing the mundane details of her life. The middle and end of the novel were full of mostly unremarkable information about the characters’ daily lives. And, like I do with that chatty friend, I started tuning it out after a while. (Don’t tell my chatty friends I said that.)

Something Stephen King said in his book On Writing really stuck with me. A good novel is all about the story. Characters, themes, etc, are secondary to the story. I think that’s why this novel didn’t work for me. There was strong character development and the lesson about the impacts of mental illness was a good one, but the story wasn’t strong enough to carry the novel past the climactic event that happened in the first 1/3 of the book. It kind of fizzled out in the middle and didn’t recover.

If you’ve read Ask Again, Yes, I’d love to hear your opinion. The book has received good reviews, so I know there are some dissenting opinions.