American Dirt is a gripping novel about a woman and her son who have to flee Mexico and migrate to the US in order to escape a violent drug cartel. It’s a sympathetic and suspenseful take on one of today’s biggest political topics – illegal border crossings.

Lydia and her husband, Sebastian, and son, Luca, live in Acapulco, which was a popular tourist spot but is sliding into ruin due to drug cartel violence. Lydia owns a book store and Sebastian is a journalist who often reports on the cartels, a very risky activity.

Lydia unknowingly befriends the head of a cartel, Javier, when he shops at her store. Javier visits her store often, where the two have long, deep conversations and become very close friends. He seems to have fallen in love with her and calls her “Queen of My Soul.” Lydia is devastated when she finds out who he really is, but doesn’t break off the relationship – she’s just more emotionally distant with Javier.

Then, Sebastian writes an in-depth article about Javier that changes everything. There’s an unexpected consequence that causes Javier to lash 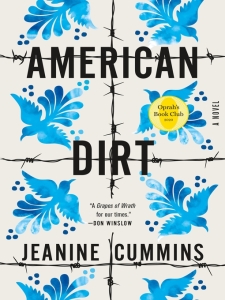 out violently, and suddenly Lydia and Luca find themselves on the run. What follows is a suspenseful journey to American dirt.

Lydia and Luca literally just have the clothes on their backs and some money Lydia is able to scrape up. It’s soon obvious that the cartel is hot on their trail and this adds suspense throughout their flight from Mexico. What Lydia and Luca encounter along the way is harrowing – violent cartels unconfined by laws, preyed-upon migrants, desperate rides on top of trains, and dangerous, coyote-led desert border crossings, to name a few. On top of this, Lydia and Luca are grieving as they endure these hardships.

There are also some elements of goodness – fellow migrants and people that generously help them along the way. The author balanced the bad and good really well.

This is such a good book. The character development is nuanced and so well done. Luca was a particularly appealing character, a vulnerable little boy with a wise old soul. Lydia’s strength, grief, and love for Luca were palpable. And the author managed to make Javier both sympathetic and repellant.

The way the story was woven together – the present and the past – was skillful. The story opens with a shocking scene and it’s slowly revealed, through flashbacks, how this came to be.

And the plot is taut and riveting. There’s a lot of suspense and emotion baked into this story and although I believe people should obey our immigration laws, I was rooting for Lydia and Luca to make it to safety in the US.

I avoided this book for a while because of the mind-numbing controversy surrounding it. You might recall when Oprah added it to her book club in January of this year it ignited some Twitter outrage. There seem to be several points of contention, the worst of which is “how dare a white woman tell a brown story.” (identity politics at its worst!) But there are also charges of exploitation, stereotypes, and inaccuracies (of which I haven’t seen any details). And probably the most interesting complaint is that the publishing industry christened this as “the book that will change hearts and minds about illegal immigration.” The publisher gave the author a rare seven figure advance and she also quickly sold the movie rights. So there was a lot of hype but, according to the critics, the target audience is people who are already on the side of migrants. Sounds like the publisher’s marketing misfired.

To be clear, this isn’t fine literature and it’s not the great American novel or a story that “will inspire important conversations.” It’s a really good thriller and that’s how the publisher should have positioned it.

Thanks, George, for recommending American Dirt. I wholeheartedly give it a thumbs up.

Have you read American Dirt? What did you think?