This post may contain Amazon Affiliate links. As an Amazon Associate I earn a small commission from qualifying purchases. (This in no way affects the honesty of my reviews!) All commissions will be donated to the ALS Association.

Project Hail Mary is a fun and imaginative story of an interstellar mission to save the world from a hungry alien life form that is eating the sun’s energy. This is author Andy Weir’s follow up to his highly entertaining book, The Martian, and I have to say I liked it even better than The Martian.

I read Project Hail Mary as part of the 2022 Thoughtful Reading Challenge. May’s challenge was to read a book that takes place in space in honor of National Space Day (May 6).

The main character, Ryland Grace, is a junior high school science teacher and a very unlikely person to save Earth from a devastating ice age. He used to work in academia until he wrote a controversial paper that made him a pariah. However, that same paper catches the eye of the person in charge of developing a plan to address the alien microbes (a woman named Stratt – I can’t wait to see who plays her in the movie!).

Grace unwittingly becomes the world’s foremost expert on astrophage (the alien life form). But he doesn’t remember this at the very beginning of the book when he wakes up on a spaceship with his memory gone. His two crew mates lie dead in their beds and Grace can’t even remember his name, let alone the nature of his mission. 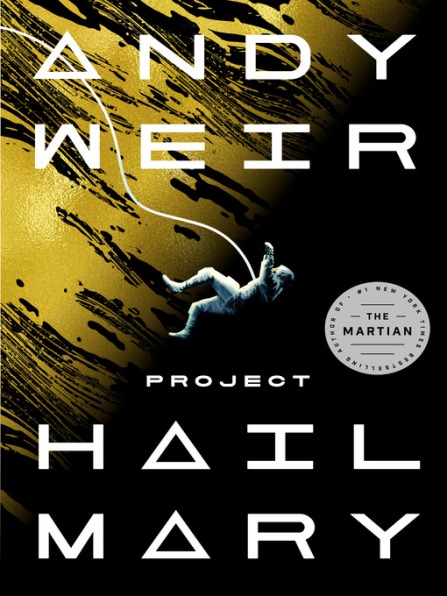 But he slowly pieces things together and, together with a charming alien named Rocky whose planet also has an astrophage problem, uses science and ingenuity to design a plan. But, of course, things don’t go smoothly. Can the two overcome adversity to save both worlds?

What a great novel! Andy Weir has a gift for making even deeply scientific stuff sound interesting to my very liberal arts brain. And I really like that his heroes are geeky scientists. Maybe his novels will inspire more young people to become heroic scientists and engineers.

There is plenty of action and drama in Project Hail Mary, but I think my favorite part of the story is the characters. Grace has a similar, funny, “what the heck have I gotten myself into” vibe as the main character in The Martian, and the Stratt character is priceless. But Rocky the alien stole the show, and some of my favorite scenes are ones where he and Grace are interacting.

I highly recommend Project Hail Mary, especially to fans of The Martian. But you don’t need to be a science fiction fan to enjoy this heartfelt story. There’s much more to it than science and space. It also has strong themes of friendship, loyalty, perseverance, and self-sacrifice.

Thanks, Deb, for the excellent recommendation!

**Reminder: June’s challenge is to read a book with a trip in it because it’s the season for fun vacations (and, actually, Project Hail Mary fits this category nicely).

This blog is what happens when a woman who is productive by nature gets confined to a hospital bed. I want to provide readers with some book recommendations and I hope they do the same for me!
Join 420 other followers