Whoa! What a book! “Peace Like a River” is storytelling at its finest. Author Leif Enger crafted a tale of hope, love and spirituality that will stay with you long after you read the last word.

The story is narrated by Reuben, who at the time of the story is an 11-year-old asthmatic boy living in a small town in Minnesota. His 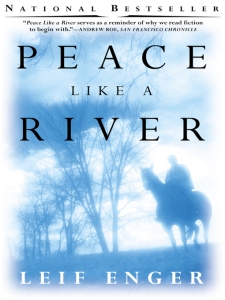 father is a good hearted man who appears to have a direct line to God. His younger sister, Swede, is an imaginative creature who writes epic verse about the old west. And his 16-year-old brother, Davy, is an old soul who kills two guys in an incident that is kind of self-defense, but kind of not.

The family is admirably close, looking out for each other and making the most of their impoverished situation. In fact, it’s this commitment to family that leads Davy to kill the two delinquents, whom he views as ongoing threats to his family’s safety. When Davy goes on the run, his family piles into their airstream trailer and tries to track him down. They really miss their son and brother.

On the road, they encounter exceptionally decent people and one bad guy who belongs in The Walking Dead. They experience miracles and heartache and new love. It culminates in a powerful ending that had me crying like a baby. Don’t say I didn’t warn you!

“Peace Like a River” was published in 2001, so it’s been around awhile. It was popular at the time, although I was unfamiliar with it when I stumbled across it on another book blog. If you haven’t read it yet, run, don’t walk, to your nearest library and check it out! You won’t be disappointed.

(As an interesting footnote, Leif Enger has only published one other book since “Peace Like a River”. Disappointing, since he’s such a talented writer. I wonder why? I may need to do some investigating… )

Have you read “Peace Like a River?” What did you think?