Erik Larson has done it again! The author of Dead Wake and The Devil in the White City brings history to life with his latest, The Splendid and the Vile. This time he tackles the first year of Winston Churchill’s tenure as prime minister, with splendid results.

I’ve been wanting to read more about Churchill because I think he’s fascinating, but the body of literature on him is pretty daunting. Author Larson commented on this, as well. Churchill’s life has been well documented by a team of faithful biographers. Rather than retread well-worn paths, Larson decided to take a fresh approach, relying heavily on journal entries from friends and family, which creates a unique look at Churchill’s personal life juxtaposed on what was going on with the war.

Churchill became Prime Minister of the UK in May, 1940, and this book mostly covers what happens during the next 12 months, which is a lot. At the time, France wasn’t faring well in the war against Germany, and the US hadn’t yet entered the war. The evacuation at 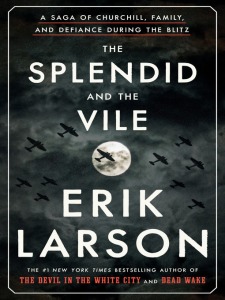 Dunkirk happened pretty soon after Churchill took office, and then France surrendered, which gave Germany access to their northern ports and air bases. This meant England was now within range of German bombers and fighter planes.

The Germans took advantage of this and launched air warfare in British skies. At first they did this during the day, but the RAF was kicking their butt, so they transitioned to night bombing, aka The Blitz. London was a prime target, but other cities were hard hit, as well. The RAF was powerless to stop the bombings because they couldn’t navigate at night effectively.

The night bombing was brutal and lasted around 9 months. Hitler and his minions designed it to bring Britain to its knees and, in particular, to force Churchill out of office. They knew that as long as Churchill was in charge, there would be no appeasement of German aggression. They were right – under Churchill’s leadership, Britain stood firm. Churchill was a gifted orator and had a lot of heart, which he wasn’t afraid to put on display. So many of his citizens absolutely loved him.

The book covers all of this and more. It also discusses some of the quirky but brilliant characters he brought into his cabinet. Through journal entries of common citizens, Larson illustrates what people were thinking and feeling during the bombings. He also chronicles Churchill’s attempts to woo Roosevelt and the extreme relief when the US finally passed the Lend-Lease Act, bringing supplies to a struggling Great Britain. But perhaps the most fascinating parts of the book were the glimpses into Churchill’s larger-than-life personality – the man who liked to work from his bed and give dictation while in the bathtub.

By happy coincidence, I was reading The Splendid and the Vile during the 75th anniversary of V-E (Victory in Europe) day. As I was reading the book, it really struck me how different things would have been had an appeaser been in power at this time or someone less skilled at inspiring the British population. Churchill was the man for the job and this was his moment in time.

The Splendid and the Vile really is a terrific book and I whole-heartedly recommend it. It’s a non-intimidating introduction to Churchill and a well-told history lesson about this particular aspect of the war.

P. S. – I think I need to use the words “splendid” and “vile” more often in my blog posts. They’re such amazing words!

What books about Churchill do you recommend? Or, have you read any good history lately?

7 thoughts on “Book Review: The Splendid and the Vile: A Saga of Churchill, Family, and Defiance During the Blitz by Erik Larson”