A Thousand Acres is a Pulitzer winning re-imagination of King Lear, set on an Iowa farm during the 1970s. It’s a beautifully written tale of one family’s quick and complete implosion. I mostly really liked it but towards the end I disliked the characters so much, including the narrator, that I was ready for it to be over.

I read A Thousand Acres as part of the 2020 Thoughtful Reading Challenge. April’s challenge is to read a Pulitzer Prize winner because current year winners are typically announced in April. However, this year the winners won’t be revealed until May due to the pandemic.

The King Lear character in this novel is Larry Cook, a proud and successful farmer. His daughters are Ginny (the narrator), Rose, and Caroline (the first letters of their names handily correspond to Goneril, Regan, and Cordelia). On the surface, things seem to be fine with the family – the farm does well, the daughters and their families seem to get along, and although Larry is a rigid tyrant, everyone has mostly fallen into a routine that minimizes the strife with him.

It all begins to unravel when Larry suddenly and inexplicably decides to incorporate the 1,000 acre farm and divide control among his three daughters. Coinciding with this event is the arrival of former 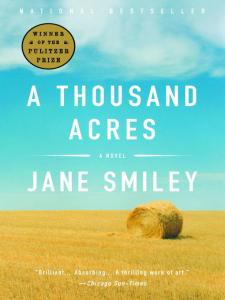 neighbor, Jess Clark, who represents the character of Edmund from King Lear. The two events lead to the family’s downfall. Adultery, insanity, greed, betrayal and memories of abuse ensue and are too much for the family to weather.

I thought this was a clever way to bring King Lear into the 20th century. The farm setting makes sense because a thousand acres of prime Iowa farmland is like its own little kingdom. And Larry Cook ruled his kingdom like a tyrant. While I recall having some sympathy for the character of King Lear, there’s nothing sympathetic about Larry, and I think that’s a shortcoming. I didn’t care much about what happened to him.

The pacing of events was interesting. Larry’s decision about the farm and the subsequent meltdown of his family seemed pretty quick to me. For example, Ginny goes from saying of her husband, Ty, “the fact was that even after seventeen years of marriage, I was still pleased to see him every time he appeared,” to unapologetically cheating on him a couple of months later. I think the speed of the implosion represents that it was all just a house of cards built on a shaky foundation. Otherwise, it didn’t make much sense to me.

On the other hand, the author very slowly reveals the extent of Ginny’s and Rose’s treachery, like peeling back the layers of a rotten onion. Ginny is at first bland and meek but steadily evolves into someone capable of cold-blooded murder. And Rose is depicted as a sympathetic breast cancer survivor until she’s slowly revealed to be a self-serving manipulator. At the beginning of the novel, I couldn’t see how the two could be capable of Shakespearean-level perfidy, but by the end they would have made Shakespeare proud.

Aside from the clever plot and skilled character development, the prose is often beautiful, especially when Smiley describes the Iowa farmland. The descriptions are both eloquent and informative, and I sometimes felt like I was receiving a farming lesson from a poet.

Overall, I definitely recommend A Thousand Acres, but prepare yourself to despise, and maybe even hope for the demise of, most of the characters by the end of the story.

Did you read a Pulitzer Prize winner this month? Tell us all about it in the comments section.

**Reminder** May’s challenge is to read a book by a Mexican author.

7 thoughts on “Book Review: A Thousand Acres by Jane Smiley”